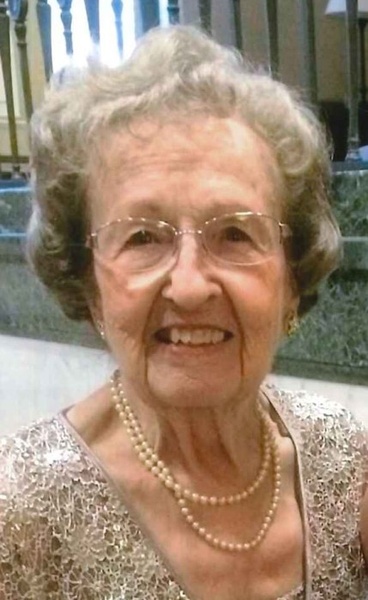 Carolyn Coleman Moye, 91, of Americus, GA passed away on Sunday, April 12, 2020, at Phoebe Sumter Hospital in Americus, GA. Due to the coronavirus pandemic a private family burial will be held with Rev. Jerry Akin officiating on Friday, April 17, 2020, in Buena Vista. The service for Mrs. Moye will be livestreamed on the Way-Watson Facebook page at 1pm on Friday.

Mrs. Moye was born in Fulton County, GA on Sept 26, 1928, to William Truman Coleman and Bernice Durrett. She was a devoted member of Buena Vista United Methodist Church. Raised in Pine Mountain Valley, GA, Carolyn graduated high school from Hamilton High, Hamilton, GA on May 24, 1945, and Perry Business College in Columbus, GA in 1957. As a child, Carolyn moved with her parents to Pine Mountain Valley where they were selected to be part of Franklin D. Roosevelt’s New Deal - Valley of Hope. She married her childhood sweetheart, Raymond D Moye. In 1956, the couple, with their two small children, moved to Buena Vista, GA where Carolyn worked as secretary/bookkeeper for Dent Poultry Company until 1981 when Dent sold to Cargill. She continued her duties with Cargill until her retirement in early 1990s.

After retirement from Cargill, Carolyn performed duties as church secretary for Buena Vista United Methodist Church and retired from that position in February 2016. Carolyn Moye was a servant to Marion County serving for over forty years on the Marion County Hospital Authority Board as member, secretary, treasurer and chairperson. During her tenure, she helped oversee the Marion Memorial Hospital which later transitioned to Marion Memorial Nursing Home which later became Magnolia Manor Nursing Home. While serving on this board, she was instrumental in recruiting doctors to Marion County as well as purchasing equipment for the health and welfare of the Marion County citizens. Carolyn took her position on the board serious and served her neighbors with dedication.

Being very active in her church for over 55 years, Carolyn was a past recipient of the Quiet Disciple Award of the United Methodist Women for the Northwest District. She loved her children and grandchildren with all her heart and soul, giving of her time unselfishly. Mrs. Moye was also featured in a 2009 documentary film, “Valley of Hope - Pine Mountain Valley, Georgia”.

Carolyn Moye is survived by her son, Ronald C. Moye (Julia) of Albany, GA; a daughter, Myra Hardy (Phil) of Americus, GA; two grandchildren Cara Wallis Barnes (Rick) of Juliette, GA and Zachary Coleman Moye (Christy) and a great grandson to be born in May, of Gainesville, GA; a sister-in-law, June Moye Whittle (Bob) of Decatur, GA. In addition to her parents, she was preceded in death by her husband, Raymond D. Moye and a grandson, William Daniel Wallis II. Carolyn loved her grandchildren very much.

To order memorial trees or send flowers to the family in memory of Carolyn Moye, please visit our flower store.