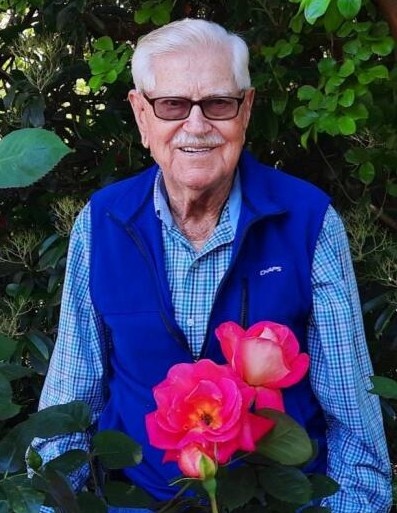 Mr. Carvis Milton Passmore, 90, of Ellaville passed away on Sunday, July 18, 2021 at Medical Center Navicent Health in Macon, Georgia. Funeral services will be held at Ellaville Baptist Church on Sunday, July 25, 2021 at 2:00PM. To watch live stream service search Ellaville Baptist Church on YouTube. Burial with Military honors will follow the service at 4:15PM in Arabi-Antioch Cemetery in Arabi, GA. Please adhere to COVID-19 guidelines on social distancing. The family will greet friends at the funeral home on Saturday, July 24, 2021, from 6:00-8:00PM.

Mr. Passmore was born October 29, 1930 in Arabi, GA to John Thomas Passmore and Mamie Nonie Parr Passmore. Upon graduation from Pinehurst High School in Pinehurst, Georgia, he was drafted into the U.S. Air Force where he served during the Korean Conflict. It was when he was stationed at Perrin Air Force Base in Texas that he met a ‘special’ yellow rose of Texas that became his bride. They were married in Texas and returned to Georgia after his discharge. He resumed working on the family farm in Dooly County, Georgia, where they raised their family. They moved to Ellaville in 1984 to pursue farming in Schley County and celebrated 50 years of marriage just before Miss Nita went home to be with her Lord in 2002. At the young age of 72, he finally retired from farming which gave him more time to pursue his passions of bicycle riding and gardening. One of his last rides was a 35-mile trek back to Dooly County at the age of 80. In addition to growing vegetables, he was proud of his kiwi plants, scuppernong vines, blackberries, figs and roses. He was a devoted member of Ellaville Baptist Church and deeply cherished his church family. He served in many capacities and was a member of the Willing Workers Sunday School class. He was honored to have been chosen to serve numerous terms as a Deacon and taught various Sunday School classes over the years. In addition to his parents, he was preceded in death by his wife, Juanita Passmore, a son, Michael Passmore; two sisters, Johnie Black, and Zona Boss; a brother, Tommy Passmore; and a great-grandchild, Nikki.

In lieu of flowers, the family asks that memorial contributions be made to the Ellaville Baptist Church, Parking Lot fund, PO Box 325, Ellaville, GA 31806 or to the charity of your choice.

To order memorial trees or send flowers to the family in memory of Carvis Passmore, please visit our flower store.