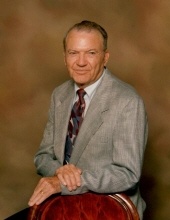 Charles T. (“Buddy”) Battle, age 101, passed away peacefully at Peachtree Christian Hospice on Saturday, June 17th, 2017. He lived at home with his wife, Ann McMickle Battle, for all but the last 10 days of his life. Born in Ellaville, Georgia, he was pre-deceased by his parents, 6 siblings, and his daughter, Debbie.

He is survived by Ann, with whom he celebrated 70 years of marriage in April, his son, Charles (Ginny), his son, Dixon (Lisa), his grand-sons, Nathan and Connor, his grand-daughters, Emily B. Rudderow (Thomas), and Elizabeth.

Charles was a man of faith and service. He served his country in the Army in WWII. He served the citizens in and around Ellaville in both the Georgia House and Georgia Senate in the late 1940’s. He retired from Atlanta Newspapers in 1978, but continued working part-time for SAS Shoes for many years. In his spare time, he volunteered at the VA and served as the family’s official Atlanta Braves statistician.

Charles and Ann were one of the founding families of Shallowford Presbyterian Church. Services will be held in the Chapel at Shallowford at 3pm on Tuesday, June 20th. Visitation with the family will begin one hour prior to the service. A graveside service is scheduled for 2pm on Wednesday, June 21, at the family cemetery plot in Ellaville.

To order memorial trees or send flowers to the family in memory of Charles Thomas Battle, please visit our flower store.