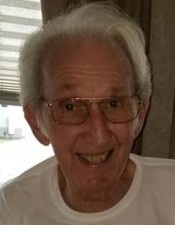 Mr. Cletus David “Dave” Robinson, 72, of Ellaville, passed away on February 16, 2020 after an extended illness.  Services will be private.

Mr. Robinson was born April 10, 1947 in Bedford, IN to the late Cletus W. Robinson and Helen Marie Carter.  He was a veteran of the United States Army.

Survivors include his son and daughter-in-law, Mike and Renaye Robinson of Ellaville; two grandsons, Cody Robinson and his wife, Hannah of Ellaville, GA and Brian Harris and his wife, Casi of Richland, GA; and two great-granddaughters, Whitley and CallieAnna.

To order memorial trees or send flowers to the family in memory of Cletus "Dave" David Robinson, please visit our flower store.