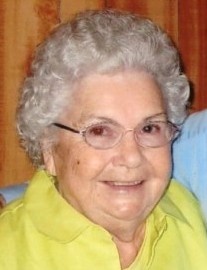 Mrs. Doris Irene Elliott Foster, 85, of Box Springs, GA, passed away on Tuesday, July 18, 2017, at Gentiva Hospice in Columbus, GA.  Funeral services will be held at 2:00pm on Friday, July 21, 2017, at Ft. Perry Baptist Church with Rev. Gene Rosinbaum and Rev. Mike Toomey officiating. Burial will follow the service at the church cemetery. Serving as pallbearers will be Ryan Foster, Jason Watson, Ashston Albert, Greg Watson, Wayne Ledbetter, Jerry Anthony, Jeff Fuller and Ferrell Wiley. Honorary pallbearers will be the Deacon’s Board of Ft. Perry Baptist Church. The family will greet friends one hour prior to the service at Ft. Perry Baptist Church beginning at 1:00PM

Mrs. Foster was born in Mauk, GA, on December 21, 1931, to Emmett Robert and Vetro Posey Elliott. Baptist by faith, she was a member of Ft. Perry Baptist Church where she and her husband served as leaders for 53 years. Mrs. Foster worked at J. J. Newberry (Columbus) Department store prior to her and her husband, Freeman Foster, becoming owners of Hamilton Road Barbecue Restaurant in Columbus. Mr. and Mrs. Foster received several Reader’s Choice awards during their 2 1 years of serving some of the greatest barbecue in the South!  She lived in Columbus most of her life but moved back to Marion County in 2008. In addition to her parents, she was preceded in death by her husband, Freeman Foster, by three brothers, Rudolph Elliott, Emmett Linder Elliott, and Donald Elliott, and by four sisters, Verna Mitchell, Imogene Foster, Autry Rutherford, and Muriel Brannon.

The family wishes to express appreciation for special friends and caregivers: Tika Schorr Morrison, Joyce Clark, Ann Loggins, Rebecca Prince, Janie Ledbetter, Ruth Whitley(deceased), Vonda Chanley, Nancy Sellers, and Linda Anthony; all the staff of Gentiva Hospice, especially Heather Shavers and Tonya. Our sincerest gratitude for the nurses and techs at Gentiva Hospice Home Savannah Grand, who were so caring and kind to our mother during her last days! Last, but not least, we remain grateful for the awesome medical care given by Dr. George Shannon and Dr. Mary Simpson for over 30 years.

To order memorial trees or send flowers to the family in memory of Doris Irene Foster, please visit our flower store.