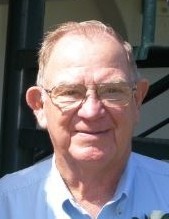 Mr. Dowling was born August 28th 1934, in Whitneyville, ME.  A Marine, Ed was a Korean War Veteran, and part of the Marine Corps Honor Guard for President Harry S. Truman in Florida where the President maintained the Little White House in Key West. Upon retiring from civil service, Ed founded Dowling’s Welding and Fabrication Inc. in Key West. Ed was Past Master of Anchor Lodge 182 Free and Accepted Masons, Key West, Fl. In 1996, he retired to Buena Vista, GA. He was a member of the Union United Methodist Church in Buena Vista, GA. Ed was preceded in death by his Father Harry A. Dowling, and Mother Fannie Willigar Chasse ,  Grandson Matthew C. Dowling Jr. and several brothers and sisters.

“Sometimes life is a funny thing! It still makes me stop and think when moments like death and celebration happen at the same time. I also begin to ponder at almost 41, what will my legacy be when I’m gone. Will I even have one!  What have I done that has made a difference in the lives of others? Those that leave a great legacy are rare! But God has blessed me with some of those great people! Dare I be human and say I’m tired of saying goodbye to them! For a moment, I’m just going to be selfish. But while celebrating the beginning of other’s lives later this evening. I will quietly in my heart celebrate the life of a great man who taught me so much and loved me unconditionally! You see, blood doesn’t make you family! LOVE does”
-Vicki Wright

To order memorial trees or send flowers to the family in memory of Edgar Turner Dowling, please visit our flower store.
Send a Sympathy Card