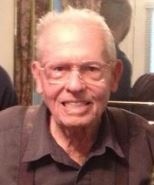 Mr. Carcaba was born in St. Johns County, FL, on November 23, 1925, to Eduardo Felix Carcaba, Sr. and Kathleen Mary Rigdon Carcaba. He was a devoted Catholic and a member of San Sebastian Catholic Church. Mr. Carcaba was a veteran and served in the Air Force during World War II. He was the owner and operator of Carcaba’s Electric Service for over 40 years before his retirement. Mr. Carcaba enjoyed hunting in his spare time. Coming from St. Augustine, FL, he moved to Buena Vista in 1994. In addition to his parents, he was preceded in death by his wife, Susie M. Carcaba, and by a son, James Felix Carcaba.

He is survived by a son and daughter-in-law, Carl and Christy Carcaba of Buena Vista, GA; two grandchildren and four great-grandchildren.

Watson-Tante Funeral Home is in charge of the arrangements.

To order memorial trees or send flowers to the family in memory of Eduardo Felix Carcaba, Jr., please visit our flower store.