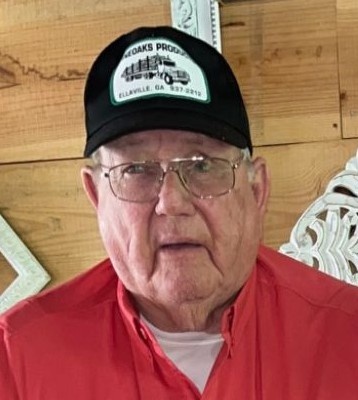 Mr. James Joel “Jimmy” Storey, Sr., 79, of Ellaville, Georgia passed away on July 11, 2022 after an extended illness.  Funeral services will be held at Shiloh Baptist Church on Wednesday, July 13, 2022 at 4:00 PM with Rev. Steven Fripp and Rev. Hugh Harbort officiating.  The family will greet friends from 3:00PM until service time.  Burial will follow in the church cemetery.  Active pallbearers will be Kevin Martin, Mike Berry, Robbie Cooper, Luke Martin, Chanler Cooper, Riley Cooper, Jase Storey, and Ward Snider.  Honorary pallbearers will be Cecil Shutters, Johnny Heath and all current and former employees of PineOak Products and associates of PineOak Products. The family will also be receiving friends at 387 Candy Cane Lane, Ellaville, GA

Mr. Storey was born August 6, 1942 in Webster County, Georgia to Wiley Boyette Storey and Fannie Belle Eason Storey.  He was the owner and operator of PineOak Products. Mr. Storey loved to work but more importantly he loved his family and spending time with them, especially his grandchildren and great-grandchildren.  He enjoyed coon hunting and riding his Mule ATV and John Deere Tractor. Mr. Storey was a member of Shiloh Baptist Church.  In addition to his parents, he was preceded in death by a sister, Clara Johnson Woody.

In lieu of flowers, the family asks that donations be made to Shiloh Baptist Church or Phoebe-Sumter Hospice.

To order memorial trees or send flowers to the family in memory of James "Jimmy" Joel Storey, Sr., please visit our flower store.