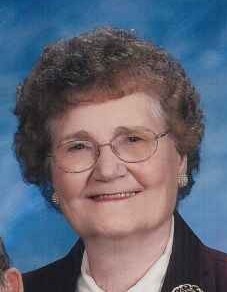 Mrs. Jewell Dean Wiley Willis, 89, of Ellaville passed away peacefully at her home on Tuesday, February 16, 2021.  A private family graveside will be held in Ellaville City Cemetery. Family and friends that wish, may visit with Mrs. Willis on Thursday, February 18, 2021 from 9:00AM until 5:00PM at Way-Watson Funeral Home in Ellaville.

Mrs. Willis, affectionately known as “Nanny” was born in Abbeville, AL on May 19, 1931 to Johnnie Franklin Wiley and Cora Lee Anglin Wiley.  She was a member of Ellaville Baptist Church and had been a former active member of Faith Baptist Church in Americus, GA and Northside Baptist in Quitman, GA.  Nanny loved quilting, sewing, arts, crafts and flowers.  She was an animal lover, and especially enjoyed feeding the birds, squirrels, chipmunks and any animal that was hungry.  Her joy was sharing her crafts with everyone she met and baking and sharing her Christmas goodies.  She was most well known for her pecan brittle.  Mrs. Willis was preceded in death by her husband of almost 70 years, Clarence Willis, Jr, four sisters, Ruby Grantham, Dorothy L. McCall, Bessie Mauldin and Lena Mae Freeman, three brothers, Melbourn F. Wiley, Carl Wiley and Pete Wiley; and a granddaughter, Amanda Castleberry.

To order memorial trees or send flowers to the family in memory of Jewell Dean Willis, please visit our flower store.