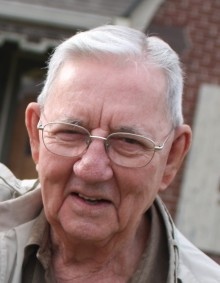 Ellaville, GA – Mr. Joseph Vernon Dillard, 89, Ellaville, passed away on January 16, 2018 at Perfect Care in Americus, Georgia. Funeral services will be held Friday, January 19, 2018 at 1:30 PM at Ellaville United Methodist Church with burial to follow at the Ellaville Cemetery. Rev. Jonathan Beckum will officiate.
Vernon was born on October 13, 1928, in the Concord Community of Schley County, Georgia, to the late Joseph Emmett and Eunice Bryan Dillard. He attended Concord School, graduated from Schley County High School, and attended Georgia Southwestern College.
He lived in Ellaville most of his life except for a few years when he lived in Jacksonville, Florida. He was a long-time member of Ellaville United Methodist Church and served the church in many positions, including Trustee in his later years. He was a former member of the Ellaville Lions Club. He was a member of the American Legion Post 191 and was a Past Commander. He served in the U.S. Air Force from 1949 to 1952 and attained the rank of Staff Sergeant. He served in Japan during the Korean War where his primary job was senior radio mechanic, ensuring that the necessary radios were installed in the aircrafts. He was a true patriot who loved his country and was proud of his service. For many years he was responsible for placing the flags around the city park for deceased veterans. He was a life member of the National Rifle Association and enjoyed collecting guns and coins, being outdoors, and studying history. During his lifetime, he held many jobs including owning a hardware store, driving for Champion Home Builders, working for the US Postal Service, and working for the state of Georgia. He loved to farm and raise cattle since he came from a farming family. When he retired, he row-cropped and tended a herd of approximately 150 cattle. He loved spending time with his family, and in his later years he enjoyed visiting and drinking coffee with friends at the local restaurants. He was a jokester and loved telling stories of how he and his brothers played tricks on their sisters and even on their brothers-in-law. He especially enjoyed telling stories, reliving his past of growing up in the Concord Community with a special closeness to his brothers and sisters.
He is survived by his wife of 62 years, Jacquelyn Rigsby Dillard; their daughter and son-in-law, Jolyn and A.J. Morris of Columbus; and their son and daughter-in-law, Jody and Donna Dillard of Ellaville. Also surviving are six grandchildren: Chelsey (Zach) Smith and their children Roran and Charlie of Tuscaloosa, AL; Halley (David) Hancock and their children Adelaide and Dawson of Columbus; Caitlin (Mathes) Ballard of Columbus; Jay Morris of Columbus; Payton Dillard and Jacob Dillard of Ellaville. Vernon was the last survivor of eight children born to Emmett and Eunice. He was preceded in death by brothers Harold (Geraldine) Dillard and Marcus (Mary) Dillard and the sisters Jeanne (Russell) Yarbrough, Estelle (J.R.) Bridges, Mamie (Johnny) Grant, Mavis (Kermitt) Greene, and Thelma (Carl) Ivey.
Active pallbearers will be Jay Morris, Jacob Dillard, Marc Ellis, Zach Smith, David Hancock, Mathes Ballard, David Lee, and Dave Perry. Honorary pallbearers will be members of Post 191 American Legion, John Oscar Matthews, and Jim Sellars.
Visitation will be held from 6:00 PM until 8:00 PM on Thursday, January 18, 2018 at Watson-Giddens Funeral Home in Ellaville.  Memorial contributions may be made to Ellaville United Methodist Church C/O Treasurer Johnny Wall, PO Box 74, Ellaville, Georgia 31806.
Watson-Giddens Funeral Home of Ellaville, Georgia has been entrusted with the arrangements.

To order memorial trees or send flowers to the family in memory of Joseph Vernon Dillard, please visit our flower store.
Send a Sympathy Card