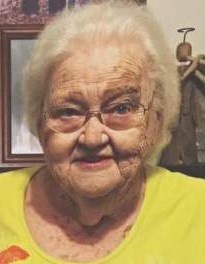 Mrs. Wolf was born June 13, 1931, to the late Herman and Carrie Benson Goodroe in Marion Co., GA.  She was a member of the Buena Vista United Methodist Church, the United Methodist Women, and the Bridge Club.  Mrs. Wolf enjoyed cooking and loved spending time with her family and friends.

Survivors include one son, Max (Sonny) Wolf and wife Dee of Daphne, AL, one daughter, Lynda Lynch of Leslie, GA, a sister, Judy G. Harrison of Montgomery, AL, four grandchildren, Jared Lynch, Abby McCard, Riley Wolf, and Coleman Wolf, one great grandchild, Baylee McCard, and one due in August.  In addition to her parents, Mrs. Wolf was preceded in death by her husband, Max Wolf.

To order memorial trees or send flowers to the family in memory of June G. Wolf, please visit our flower store.
Send a Sympathy Card