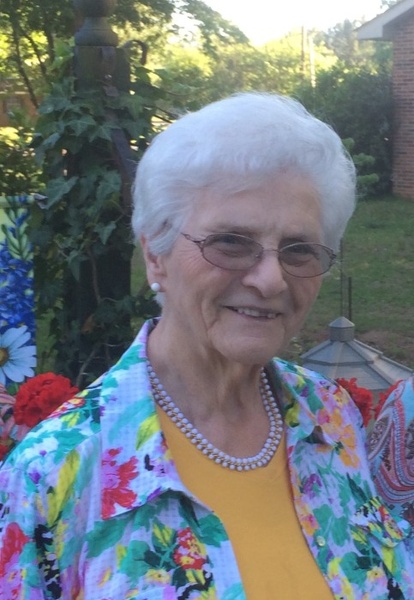 ELLAVILLE, GA--Kathleen Louise Holmes Hall of Ellaville, born August 18, 1927 in Alabama passed away on Wednesday, December 11, 2019 at her granddaughter’s family home, Warner Robins, Georgia after twenty-five days of hospice care.  Funeral service will be held on Friday, December 13, 2019 at Ellaville Baptist Church.  Family will receive guests from 1pm-2pm, and services will be at 2pm. Graveside internment will commence following the service at Ellaville Cemetery.  In lieu of flowers, the family requests that monetary donations be made in honor of Mrs. Kathleen Hall to Ellaville Baptist Church, P. O. Box 325, Ellaville, GA  31806 or to Heart of Georgia Hospice, 103 Westridge Dr, Warner Robins, GA 31088.

Kathleen Hall was the fourth of six children born to Richard & Minnie Holmes in Vienna/ Hawkinsville, Georgia area.  Kathleen completed school and married Warren Russell Hall on June 13, 1944 at the age of seventeen at the Pastorium of First Baptist Church of Hawkinsville, Georgia.  Their union was a happy and blessed one of sixty-three years, until Mr. Hall passed away in 2007.  They moved to Ellaville in 1948 living in the John Gill home until they moved to the home they built fifty-five years ago.  They shared a home full of love, laughter, and memories with their daughters, Onita Gray and Dorothy Jones, and each of their families.

Mrs. Hall was a hard working woman, always doing for others, volunteering in many organizations and considered a real Southern lady.  Her work history included managing the Suwannee Store of Ellaville, Georgia in 1948, followed by becoming an inspector for the Manhattan Shirt Factory of Americus, Georgia for several years.  Mrs. Hall worked for Belk Hagan in Americus for twenty-six and half years as the Ladies Ready to Wear buyer.  While she waited on many during those years, some of her fondest memories are those of attending to former President Jimmy Carter & former First Lady Rosalynn Carter, where she was asked to attend the Inauguration Ceremony.  She retired at the age of sixty-two.  Her motivation and initiative to serve others opened up opportunities to oversee various gift shops, home and furniture stores.  Her recent accomplishments included overseeing management of the Auxiliary Gift Shop at Phoebe Sumter Hospital from March 2012 to February 2019.  Mrs. Hall volunteered as a Pink Lady at the hospital, annually serving on the voting polls in Schley County, Georgia, and participating in the Ellaville Baptist Church choir and hospitality teams.

Mrs. Hall was a healthy woman, even after a two-year battle with stage four-lung cancer and Rocky Mountain Spotted Fever.  The cancer returned in November on the brain after several days in the hospital. She was dismissed to the care of Heart of Georgia Hospice in Warner Robins, Georgia.  She passed away peacefully, surrounded by the love of friends and family several days proceeding.

To order memorial trees or send flowers to the family in memory of Kathleen Louise Hall, please visit our flower store.