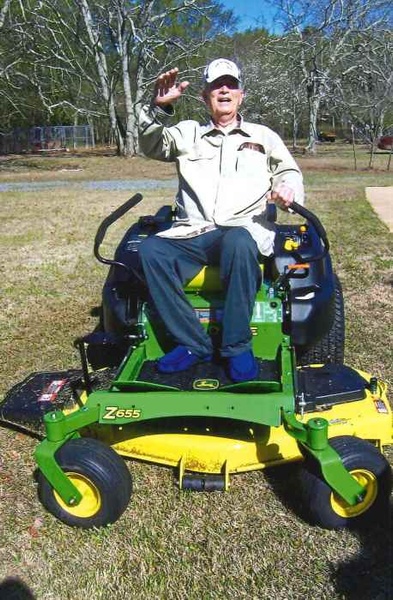 When Lewis was three years old, his family moved to Albany, Georgia where the family operated a grocery store, filling station, grist mill and trailer court.  He graduated from Albany High School in 1943 and immediately enlisted in the Marine Corps.  He would serve in WW II, the Korean War and, after Active Reserve Duty, retiring from the Marines in 1963.

Lewis graduated from Florida State University, earned a Master’s Degree in Education from Peabody College of Vanderbilt University, and obtained an Education Specialist Degree from the University of Georgia.  He was the principal of Woodstock Elementary (K-8) from 1968-1988 before retiring in Schley County.

Lewis was a member of the American Legion, Military Officers’ Association of America, the Marine Corps Association and the Sons of Confederate Veterans.

Lewis married Floyce Rosalie Reagan of Osceola County Florida in 1950.  They raised a wonderful family and enjoyed a long, happy and prosperous marriage of over 67 years.  He was a godly man, a loving husband, a devoted father, and a member of America’s greatest generation; a true American hero.

Lewis was preceded in death by his parents, Mr. and Mrs. William E. Peters of Albany, sister, Kate Bradley of Albany, and a grandson, Jason.  He is survived by his wife, Floyce, a brother, Grayson Peters (Col. USA Retired) of Sun Lakes, Arizona, three sons, Dana Reagan of Barney, Gary Higgins of LaGrange, Lewis Marion of Rome, eight grandchildren, and three great grandchildren.

In lieu of flowers, the family would prefer a donation to “Wounded Warrior Project, Inc.” in his name (https://support.woundedwarriorproject.org).

To order memorial trees or send flowers to the family in memory of Lewis H. Peters, please visit our flower store.