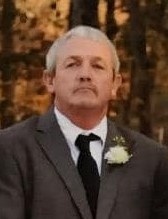 Mr. Michael “Mike” David Robinson, 54, of Ellaville, passed away on Thursday, April 23, 2020 at his residence.  A private family graveside service will be held in Ellaville Cemetery.

Mr. Robinson was born January 23, 1966 in Americus, GA the only child of the late Cletus David Robinson and Sue Owens Robinson.  Mr. Robinson enjoyed watching racing and being at the race track.  He also enjoyed construction and maintenance work. Mr. Robinson was always joking around with family and friends as well as spending time with his cat Bandit.  He was a member of Ellaville Baptist Church.

To order memorial trees or send flowers to the family in memory of Michael "Mike" David Robinson, please visit our flower store.
Send a Sympathy Card