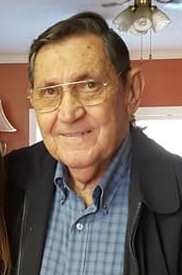 ELLAVILLE, GA --- Mr. Stanley Chipman Bivins, Sr., 83, of Ellaville, passed away on Friday, October 26, 2018 at Phoebe Putney Memorial Hospital.  Funeral services will be held at 2:00 PM on Sunday, October 28, 2018 at Ellaville Baptist Church with Rev. Joel Smith and Rev. Earl Dunmon officiating. Burial will follow in the Sunset Memorial Gardens in Americus, GA.  Active pallbearers are Jim David McFather, Christian Bivins, Trent Bivins, Jake Bivins, Eric Watson and Brad Burk.  Honorary pallbearers will be the members of the Willing Workers Sunday School Class.  The family will greet friends at the funeral home Saturday, October 27, 2018 from 6:00-8:00PM and at 195 W. College Street in Ellaville at other times.

Mr. Bivins was born April 27, 1935 in Andersonville, GA to the late William McKinley Bivins and Beulah Avery Bivins.  He was a member of Ellaville Baptist Church where he was a member of the Joy Club and the Willing Workers Sunday School Class.  Mr. Bivins loved his family and was an avid sports fan.  He was an all-star for the Americus Panthers Baseball team in 1953, 1954 and 1955.   The team became state champions.  Mr. Bivins went on to play in the St. Louis Cardinals minor league system.  Mr. Bivins was retired from the Seaboard Railroad.

To order memorial trees or send flowers to the family in memory of Stanley Bivins, please visit our flower store.