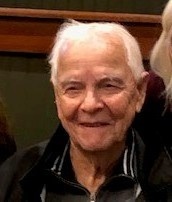 Mr. Herring was born June 30, 1927, in Oklahoma City, Oklahoma to William Wilburn Herring and Thelma Ruth Davis Herring.  He served over 20 years in the United States Airforce and retired as Tech Sergeant in 1972.  He was deployed twice to serve in the Vietnam and Philippine Wars. He was also a member of the Shriners. He was a great provider for his family and close family knew him as a prankster, mainly to his Aunt Mable and Sister Jimmie, and could tell you some of the funniest jokes.  He was a devoted friend, husband, daddy, G-pa, and GG-pa. In addition to his parents, he is preceded in death by Carole, his wife of 58 years.

To order memorial trees or send flowers to the family in memory of William N. Herring, please visit our flower store.